Blog
Related Content
What Do I Do With My Hands?
December 8, 2020 by Jim Moushon 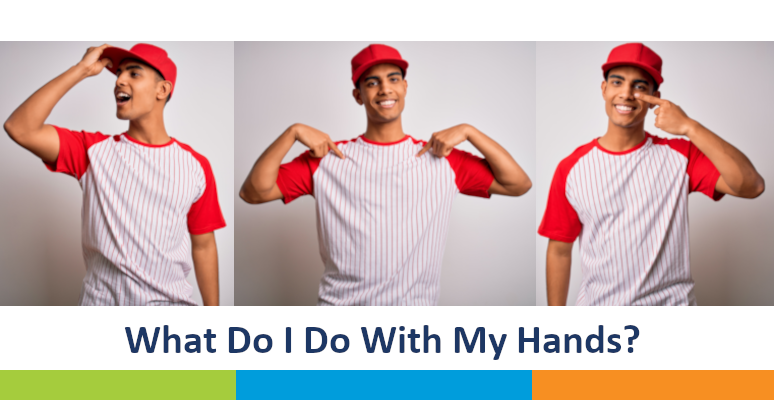 Have you ever been told you talk too much with your hands? Perhaps someone said to you, “If we tied your hands together, you couldn’t talk.” During my one on one coaching engagements with executives, I routinely get asked, “What do I do with my hands?” When it comes to hand gestures during presentations, most people fall at either end of the spectrum. They either barely move their hands and arms with them left hanging limply at their side or flail them about so much, they look like a third base coach signaling the runner on first to steal.

For those of you who may not be baseball fans, a batter or base runner will often look to the third base coach for a sign. The coach will signal whether to steal a base, bunt, swing away, or take a pitch (don’t swing). In order to confuse the opponent and keep them from “stealing the sign” (knowing what the batter/runner has been told to do), the third base coach will camouflage the real sign with a series of false signals. The coach may tap his/her forearm, clap their hands, touch their nose, touch the bill of their cap, brush their hand down their thigh, etc. If you’ve ever seen the movie A League of Their Own, there is a great scene where the characters played by Tom Hanks and Gina Davis use these gestures to signal to the batter at the plate.

Whether you’re signaling a batter or giving a presentation, people will tend to focus on the hand motions and be distracted from your core message, especially if the hand motions have nothing to do with the content. It is important to ensure the gestures you are using align with your message. For example, imagine a presenter talking about an exciting new initiative and barely moving their hands and arms or sharing plans for downsizing and using big, sweeping two-handed gestures.

The main reason people are distracted by misaligned gestures is because the eyes are attracted to light, color, and motion. If you’ve received negative feedback about using your hands too much, you are likely using mostly two-handed gestures. Two-handed gestures tend to be repetitive or mirror each other and don’t necessarily support the message you’re trying to convey.

Emphatic or descriptive gestures support your words and engage your audience. Your audience will tend to stay focused on what you are saying and how you are saying it. Appropriate gestures help convey the speaker’s passion and/or commitment to their message by increasing the speaker’s inflection. Holding the attention of the audience leads to better understanding and retention of your main message. Effective gestures are especially critical in our ever-increasing virtual environments so that a speaker isn’t just a talking head on our computer screens.